Posted at 05:09h in News and updates by adminva 0 Comments

The 2014 Dental Health Week from 4-10th of August, supported by the Australian Dental Association is quickly approaching.  It’s always a good opportunity to bring a little added attention to dental care in the general community.  This year’s theme is of dental health on Babies and Toddlers dental health.

Even though dental decay is the most common chronic disease for children, it’s preventable.  Firstly, children aren’t born with decay causing bacteria.  It’s actually not possible for children’s teeth to decay without the nasty stuff.  So, where does the decay causing bacteria come from?  From the adults around them by the testing of dummies, sharing of spoons, kissing of babies directly on the lips, and through partially eaten food.  Mouth to mouth transfer of bacteria.  In addition it’s been found that the more active decay there is in the adult, the more easily the bacteria is transferred to the children.

Yes, it can be very hard to avoid the things that cause the transfer of bacteria.  If bacteria tests were carried out for every child, it would probably be rare to find children without the bacteria transfer.

On this dental topic of infecting children with bacteria, American dentists are actually trained to be much more stern and assertive to parents.  There is a lot more awareness in the States.  Thankfully we’re a lot friendlier bunch in Australia and as such we will never really fault parents for coaxing children by eating a little of the food and then giving it to the toddler.  But maybe we should, and this is nevertheless a useful fact that we want to share with parents who may not even be aware that children are actually infected with decay causing bacteria.

It’s up to parents to decide whether it’s worth the effort.  To those parents who have enough discipline to avoid passing on the decay causing bacteria,  we take our hats off to you for saving your children from early dental treatment.   This is no easy task. 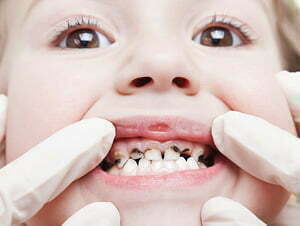 Secondly, and the bigger lifelong issue is to do with Diet.  Diet has a huge huge part to play in feeding the bacteria to cause decay in children’s teeth.  Unlike obesity where quantity is the problem, dental disease tends to occur more from the frequency of eating.  Constant snacking on foods can be especially damaging to teeth as the teeth don’t get a chance to recover and are constantly under attack by the bacteria.  So, sweets are best had straight after meals and eaten quickly.

Awareness of frequent sugar consumption leading to early childhood decay is a big part of the 2014 Dental Health Week.  The Australian Dental Association is asking parents to be on the lookout of ‘The Sugar Bandit’ in the family.

It appears that grandparents, aunties, and uncles are often guilty of letting the hard work by the parents go out the window.  In spoiling their grandchild/niece/nephew with love, loading them up with sugar to make them happy can be a real problem if the child is with the grandparent, Uncle Peter, or the babysitter for a few days a week.  Unfortunately this kind of spoiling does have some bad consequences.  Parents, be on the lookout for the bandit.